Gender Equality in the Workplace: Where Are We Today? Lecture with Jenny Yang

Throughout her career in the government, private, and nonprofit sectors, Ms. Yang has worked to ensure fairness and equal opportunity in the workplace. Under her leadership as Chair, the Commission promoted transparency by providing the public with an opportunity to submit feedback on proposed guidance documents. Through this initiative, the Commission updated its guidance on retaliation, the most frequent workplace complaint, as well as its guidance on national origin discrimination, addressing issues ranging from human trafficking to workplace harassment. Ms. Yang also led EEOC’s efforts to advance pay equality by enhancing the agency’s data collection to include summary employer pay data by sex, race, and ethnicity.

To enhance the agency’s service to the public and its operational efficiency, under Ms. Yang’s leadership as Chair, the agency launched digital systems to facilitate the online exchange of charge information. Ms. Yang also oversaw the adoption of an updated Strategic Enforcement Plan, which will guide the agency’s work through 2021. In addition, Ms. Yang worked to strengthen the agency’s capacity to tackle systemic barriers to opportunity, including conducting a comprehensive review that culminated in a report on the agency’s systemic program.

Prior to joining the EEOC, Ms. Yang was a partner at a law firm where she represented employees across the country in complex civil rights actions. Ms. Yanghas also served as a Senior Trial Attorney with the U.S. Department of Justice, Civil Rights Division, Employment Litigation section, and at the National Employment Law Project working to enforce the workplace rights of garment workers. Ms. Yang received her B.A. in Government from Cornell University. She received her J.D. from New York University School of Law.

This event will also be live broadcasted  in Room 206 of the Rutgers Law School Camden Location. 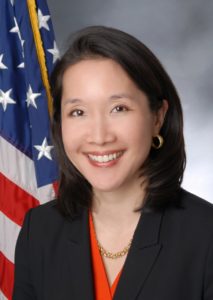