The Rutgers Center for Gender, Sexuality, Law and Policy, in partnership with the Transnational Legal Initiative, welcomes Tracy Robinson, Senior Lecturer, The University of the West Indies, at Mona,  for a lunchtime lecture titled “Criminalized Sex in the Anglo-Caribbean: Loved Law.”

Please register here by March 24, 2017.  Lunch will be served, but pre-registration is required.

Tracy Robinson is a Senior Lecturer in the Faculty of Law, The University of the West Indies (UWI) Mona, Jamaica where she teaches undergraduate courses in Constitutional Law, Commonwealth Caribbean Human Rights Law and Family Law. She did her undergraduate law training at The UWI and the Bachelor of Civil Law (BCL) at University of Oxford and an LLM at Yale Law School. At The UWI she is a co-founder and co-coordinator of the Faculty of Law UWI Rights Advocacy Project (U-RAP), which works to promote human rights and social justice in the Caribbean through strategic litigation and research. Her recent publications include the co-authored article (with Arif Bulkan), “Constitutional Comparisons by a Supranational Court in Flux: The JCPC and Caribbean Bills of Rights” ((2017) Modern Law Review forthcoming); the co-authored text with Bulkan and Saunders, Fundamentals of Caribbean Constitutional Law (Sweet & Maxwell 2015).

Between 2012 and 2015 she was a member of the Inter American Commission on Human Rights (IACHR), serving during that period as both its First Vice President and its President. While on the IACHR she also served as its Rapporteur of the Rights of Women and the first Rapporteur for the Rights of LGBTI Persons at the IACHR. In 2016, Robinson was the Bok Visiting International Professor at University of Pennsylvania Law School and also a Visiting Professor at University of Puerto Rico Law School. She was also appointed a Commissioner for the recently established WHO/PAHO led Independent Review of Equity and Health Inequalities in the Americas in May 2016. 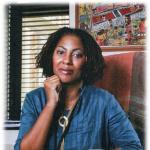